ARC review: The Chosen Ones by Veronica Roth

It's not often that I read adult fiction, but when I was asked if I'd like a copy of Veronica Roth's new adult fantasy book, I knew I had to try it as I loved so many of her books. If I was going to jump into adult fantasy I may as well jump in with an author I already know and love right?

If you haven't heard about it, here it is: 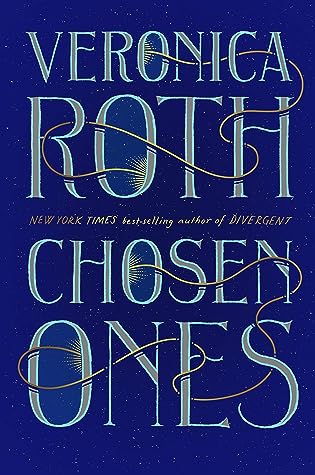 Fifteen years ago, five ordinary teenagers were singled out by a prophecy to take down an impossibly powerful entity wreaking havoc across North America. He was known as the Dark One, and his weapon of choice - catastrophic events known as Drains - leveled cities and claimed thousands of lives. The Chosen Ones, as the teens were known, gave everything they had to defeat him.

After the Dark One fell, the world went back to normal . . . for everyone but them. After all, what do you do when you're the most famous people on Earth, your only education was in magical destruction, and your purpose in life is now fulfilled?

Of all the five, Sloane has had the hardest time adjusting. Everyone else blames the PTSD - and her huge attitude problem - but really, she's hiding secrets from everyone . . . secrets that keep her tied to the past and alienate her from the only four people in the world who understand her.

On the tenth anniversary of the Dark One's defeat, something unthinkable happens: one of the Chosen Ones dies. When the others gather for the funeral, they discover the Dark One's ultimate goal was much bigger than they, the government, or even prophecy could have foretold - bigger than the world itself.

And this time, fighting back might take more than Sloane has to give.

I will say now, this was quite a complex and hard-hitting book - it deals with so many deep subjects, PTSD, addiction, depression etc. but all of it was written so well that you felt like you were really able to connect to the characters and I really  liked that about this book. I particularly found it interesting to read about how each of the 'Chosen Ones' dealt with the aftermath of their victory differently. Sloane especially is one of my favourite characters, some of her parts really pull you in and make you sympathise with her.

This was definitely a book that kept you on your toes, you thought you knew where it was going, and then bang there was another plot twist dropped in and your mind is left scrambling trying to figure out how you missed it. These twists were amazingly written, so much so that you felt like you should gave guessed what was happening all along.

The book was actually split into different parts, so it was easy to break into different sittings if you're not the biggest or fastest reader, which I think is useful for many potential readers.

Overall, I really liked how complex and different adult fantasy fiction is, I think that this has made me want to read a lot more of it. I definitely know that if Veronica decides to write more adult fantasy I'll definitely be reading it.

Are you planning on reading this or are you planning to read it? Comment below with your thoughts.
This book is out on the 7th of April and I definitely think you should go and pick it up!
at April 04, 2020 No comments:

Notes on a Nervous Planet
by Matt Haig

The Hitch Hiker's Guide to the Galaxy: A Trilogy in Five Parts
by Douglas Adams